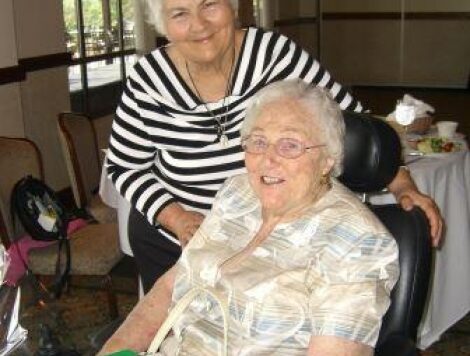 “You left us beautiful memories…

Your love is still our guide.”

Margaret (Peggy) Fraenzl  was just 94 years young when she left us on June 17, 2013 for a higher and heavenly purpose. She was born on May 15, 1919 and died peacefully with loving family members present.

Long-time friends and family members gathered at Our Lady of Perpetual Help Parish in Lakeside, CA on June 25th for her beautiful funeral mass, preceded by the saying of The Rosary by Rev. Ron Buchmiller.  Peg was beloved by so many, including her St. Madeleine Sophie’s Auxiliary ‘sisters’ who shared so many life experiences together. Many memories were brought to mind among Auxiliary members who joyfully shared stories during the special luncheon hosted by the Fraenzl family.

Peggy was a role-model to many in the community, wearing many hats over the years… from loving wife and devoted mother to active volunteer and philanthropist. She is respected and recognized for her influential role in the history of both the St. Madeleine Sophie’s Auxiliary and St. Madeleine Sophie’s Center.

The mention of Peg’s name immediately prompts her role as the Auxiliary’s First President among many other aspects of service. She also played a direct role in the 1966 start-up of the Center,  interacting as a parent with the Religious of the Society of the Sacred Heart in El Cajon, and specifically, Sr. Mary Mardel, RSCJ as Executive Director. Peg’s daughter, Margaret (Meg) Fraenzl was then – and remains —  among the original students at St. Madeleine’s.

The following is among Peg’s fond memories of the St. Madeleine’s beginnings in 1966. It is an exact excerpt from an interview done by Auxiliary member and long-time friend of Peg’s, Fran Axelson.

“At that time, there were 8 students accepted for the school. I went to the Sister and asked for an Auxiliary…and she agreed.  Then, my sister-in-law, Miriam Reed and I drew up a set of suggested by-laws and presented them to the members. The members, in turn, made changes to the by-laws and voted on the changes. We contacted other people to join the Auxiliary at that time. Dr. Betty Zak Lauerman (2nd Vice-President of the Auxiliary) was very active in all the activities.

Sr. Sally Rude, RSCJ then took over from Sr. Mardel (then Mother Mardel) until Sr. Maxine Kraemer, RSCJ assumed the responsibilities in 1968. Sr. Kraemer had earned her degree in Special Education and was very involved in fundraising and with the Auxiliary.”    Peg Fraenzl

As the funeral mass ended, those present watched the family depart the church to the hymn, “Make Me A Channel Of Your Peace”.  One could not help but note that Peggy lived her life much like how this simple and beautiful hymn is written, said to be inspired by St. Francis: “So much to be consoled as to console…to be understood as to understand…to be loved as to love with all my soul.”

On behalf of everyone in the SMS Auxiliary, Rest in Peace, Peg. You will be greatly missed and always remembered with the greatest of love.